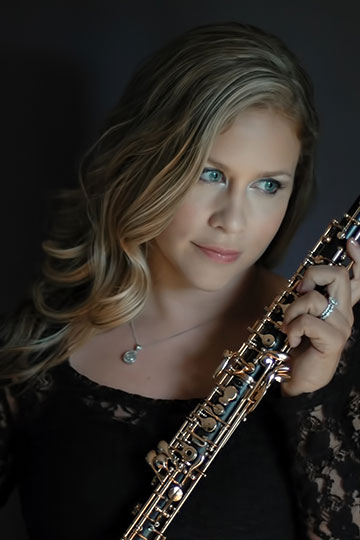 Elizabeth Priestly  Siffert is a graduate of Eastman  School  of  Music  where  she  studied with Richard Killmer and had the  distinction  of  being  the first and one of  the only  students in the school's history to  ever  receive  two  Performer's  Certificates  as  an  undergraduate. Ms.  Priestly  Siffert  has  made  frequent solo  performances  throughout  her  career  with  orchestras including  the  Rochester  Philharmonic  Orchestra,  Houston  Ballet  Orchestra  and  Orchestra  of  Saint  Luke's. At the age of 22. Her Eurpean solo debut came two years later  with  Orquestra  Classica  da  Madeira. She was  sponsored  by  F.  Lorée,  Paris  as  a  headlining soloist  at  the  International  Double  Reed  Society  annual  conference  in  New  York  City  performing  Foss  Concerto  for  Oboe  on  the  conference’s  final  gala performance.  She  also made  several  solo  performances  as  part  of  the  Goppisberger  Musikfestival performing  as a soloist  in  their Switzerland tour. Through  the  years  Ms.  Priestly  Siffert  has  also  success  in  solo competitions  including  winning  the  Eastman  Concerto  Competition and prize  winner  in  the  Cynthia  Woods  Mitchell  Young  Artist  Competition. She was second  prize  winner  in  the  world's most prominent oboe competition, the Fernand  Gillet  Hugo  Fox  Competition sponsored  by  the  International  Double  Reed  Society, and has been the highest ranged American in this competition since 2007. Her performances have brought her all over the world on radio and television with performances on America's top classical radio program, Performance Today and a televised solo performance on Portugal's Porto Canal. She has performed in the most prominent  festivals in the United States including Lincoln Center Festival (with HGO) and the Grand Teton Music Festival. Ms.  Priestly  Siffert  is  an  active  orchestral  musician  as  well.  Her  former  positions  include  second  oboe  with  the  Binghamton  Philharmonic  Orchestra  (2001‐2003),  co‐principal  oboe  with  Orquestra  Sinfonica  de  Mineria  (2003),  and  principal  oboe  with  Orquestra  Classica  da  Madeira  (2003‐2007). She  is  currently  principal  oboist  of  the  Houston  Grand  Opera  and  Houston  Ballet  Orchestras,  a  position  she  has  held  since  2008.   She  has  had  many  additional  performances  with  orchestras  throughout  the  world  such  as  the  Buffalo  Philharmonic  Orchestra,  the  Houston  Symphony  Orchestra, Orquestra  dos  Sonhos  and  the  Phoenix  Symphony  Orchestra. Ms.  Priestly  Siffert  has  been  inspired  by many  wonderful  teachers.  In  addition  to  Richard  Killmer  she  has  studied  with  Bob  Atherholt,  Robin  Hough  and  Denise  Zoch. Elizabeth  Priestly  Siffert  plays  exclusively  on  Lorée  oboes  and  is  currently  playing  on  a  Lorée  Royal  125  Amethyst. For more information on this artist visit www.ElizabethPS.com